Specialist in the Sale of Fabric to the Middle East

The Middle East Trading team sells fabric made in Japan and Southeast Asia for use in the Middle East’s major traditional ethnic dress.
Generally, men wear white and women wear black fabrics and the way they are worn seems, at first glance, to be the same. However, different people have different preferences in the color tones and texture of the fabric and the style and silhouette of the costume. These ethnic costumes have great depth, even in their simplicity, with various individual characteristics being expressed.
With our philosophy of delivering satisfaction to our customers in the Middle East, we work with many suppliers and continue to suggest new ideas for traditional dress. 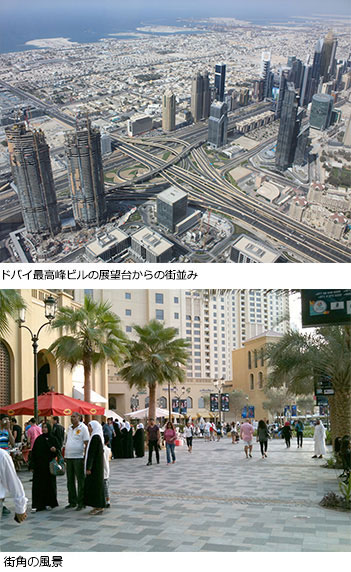 We handle natural fibers, such as cotton and wool, and various types of synthetic fibers, which continue to evolve.
In natural fibers, we import wool materials, which were the founding business of our company, from leading suppliers in Australia and New Zealand, and cotton from prominent Japanese mills based in Asia and ASEAN whose quality control can be relied on.
In synthetic fibers, we procure staple fibers whose main applications are non-woven cloth, spun yarn whose main applications are industrial material applications and filament yarn whose functionality is being developed, from Taiwan, Indonesia, and a wide range of other sources for sale in Japan, Europe and USA.

We sell Made-in-Japan fashion fabrics to European, American, Hong Kong, and Chinese markets.
Until recently, we have been exporting mainly synthetic filament textiles for women’s apparel, such as triacetate and polyester, but due to growing demand in Europe and the United States, we have started handling premium textiles of sustainable materials and are striving to expand our target customer groups and sales channels.
We have also embarked on the expansion of autonomous offshore business between our overseas offices.